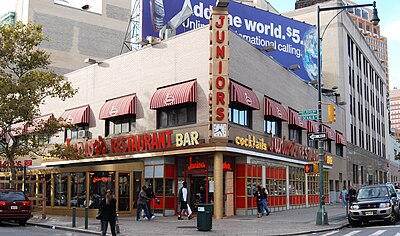 Hail a taxicab anywhere in New York City and tell the driver, “Take me to the best cheesecake in New York.” Odds are you will end up at the corner of Flatbush and DeKalb Avenues in Brooklyn, at Juniors. Junior’s landmark restaurant is known as the home of New York’s best cheesecake. For decades, Brooklynites (and other New Yorkers) have come to eat, laugh, and kibbitz (argue) over cheesecake. In the 1950’s, an entire generation came of age at Junior’s, that’s me. Their cheesecake was as important as the Brooklyn Dodgers…the Fox Theater…Coney Island…Brighton Beach. Today loyal customers still come –from all over and all walks of life. Famous mayors. Presidents. Hall of Fame athletes. Authors, singers, like Frankie (the crooner) and Eddie Cantor (Mammy), movie stars. In fact, it’s as true today as it was 60 years ago when they started, “You haven’t really lived until you’ve had cheesecake at Junior’s.”

Inside Junior’s at Foxwoods

Junior’s is a restaurant chain with the original location at 386 Flatbush Avenue Extension at the corner of DeKalb Avenue in Downtown Brooklyn, New York City. Other locations include Times Square area and the lobby of the MGM Grand Hotel in the Foxwoods Resort in Ledyard, Connecticut. The restaurant was founded by Harry Rosen in 1950. According to the restaurant, it was named Junior’s after Rosen’s two sons, Walter and Marvin.

According to GO Brooklyn, “At that corner of Flatbush and DeKalb avenues in Downtown Brooklyn, there has been a diner run by the Rosen family since 1929. In 1950, the name was changed to Junior’s, and it has been serving its famous cheesecake and other goodies ever since.”

Rosen worked with master baker Eigel Peterson to create the cheesecake known today as “The World’s Most Fabulous Cheesecake”, based on a recipe that was in the Rosen family for three generations. In addition to cheesecake, Junior’s features deli sandwiches (particularly corned beef and pastrami), ten ounce steakburgers, cheese blintzes, and unique onion rings. Fans of the restaurant are not limited to Brooklynites. A Kuwaiti prince was known to have taken several of Junior’s cheesecakes back with him.

So what’s better than 1st place? Cheesecake at Junior’s, that’s what’s better than my dance competition placement. Well, almost. I had no idea there was a Junior’s restaurant at Foxwoods. Tom, my hubby said, “We’re going to have breakfast at Junior’s. I had no idea that was the famous Junior’s, and neither did my mid-western husband. We rounded the bend from the smoky casino, and low and behold, right in front of me was my most favorite New York restaurant that I ate at for years and years and years.

The waiter gave us menus. I looked it over and with sad eyes, I looked up and asked the waiter, “Where’s the potato pancakes?” He said, “On our lunch menu.” I named lots of other dishes that I remembered. He said, “You know Junior’s. Impressive!!!” I kid you not, I remember it well, just like the song sung by Maurice Chevalier. They have Junior’s in Florida and of course I ate there too. So I asked him if I could have a potato pancake with my breakfast, with sour cream. A big breakfast later, I asked, “Will you wrap up cheesecake to take away, and how about one of your New York bagels with cream cheese and tomato?”

Happy Thanksgiving! Remember to have cheesecake.

Now that the holidays are here, maybe you will have time to enjoy a good book. Here’s a little bit about my novel:

If you like romance, and you like rip-roaring adventure, Indigo Sky is for you! Shopping at Tiffany’s, getting caught up in the New York Draft Riot, the Civil War, and the wilds of the Great Plains. Enjoy the holiday with Gail Ingis’s Indigo Sky. Sign up for my weekly blog by December 17th, and three of you will win a copy of my ebook.

Cromwell was not a hero, but he is known for his religious fanaticism and his influence that changed England from industrial and artistic growth to stagnation.

Charles I, the King and Cromwell’s adversary, was tried and executed in 1649. The English civil war was a time of great destruction of ecclesiastical and private property that was followed by the Protectorate under Cromwell.

Art had been associated with corruption, immorality, and inefficiency. A ban was placed on everything that had any appeal to the senses during Cromwell’s rule 1649-1660.

In 1660 the monarchy was restored, and Charles II was called to the throne. Charles and Louis XIV of France were cousins. Charles loved the dreamy, romantic styles of the French King—in his reaction to the repressed and subdued spirit that had prevailed during Cromwell’s Puritan Protectorate, he endeavored to imitate the lavishness and extravagances of the French court.

The Great Fire of London began on the night of September 2, 1666, as a small fire on Pudding Lane, in the bakeshop of Thomas Farynor, baker to King Charles II. At one o’clock in the morning, a servant woke to find the house aflame, and the baker and his family escaped, but a fear-struck maid perished in the blaze.

Detail of the Great Fire of London by an unknown painter, depicting the fire as it would have appeared on the evening of Tuesday, 4 September 1666 from a boat in the vicinity of Tower Wharf. The Tower of London is on the right and London Bridge on the left, with St. Paul’s Cathedral in the distance, surrounded by the tallest flames.

Advertisement for a comparatively small and manoeuvrable seventeenth-century fire engine on wheels: “These Engines, (which are the best) to quench great Fire; are made by John Keeling in Black Fryers (after many years’ Experience).”

This disastrous fire that destroyed most of London gave impetus to the construction of new homes, public buildings and churches. Sir Christopher Wren, architect, as the leading influence, designed St. Paul’s Cathedral in London.

Wren was strongly influenced by Palladio, the Italian architect. Palladio’s work was strongly based on the symmetry, perspective and values of the formal classical temple architecture of the Ancient Greeks and Romans. Charles II supported the art industries, as well as French and Flemish craftsmen.

Daniel Marot, French architect, came to England upon the revocation of the Edict of Nantes. Issued on 13 April 1598, by Henry IV of France, it granted the Calvinist Protestants of France (also known as Huguenots) substantial rights in a nation still considered essentially Catholic.

It’s told that 40,000 French weavers came to England at that time.

Do you know any other great occurrences that came from fires?

St. Augustine is the oldest city in the nation, so I have been told. America is not that old anyway. What, maybe six centuries?

That’s six hundred plus years. America is still a baby. Certainly not as old as the Middle East, or Europe or Asia. It was a fun place to visit and see where people had walked in the past.

Today’s blog is not about American history though, it is about one of the cities founded at the beginning, in 1565 says history.  Fifty-five years before the Pilgrims landed at Plymouth Rock, the Spanish established St. Augustine.

The Spanish bakery there is famous, on the famous George Street. It has been handed down through the  years and has stayed in the same family. They bake delicious breads to dunk in their delicious soups.

There is a fort, right on the water and in the town center, where they did a cannon shooting demonstration. We were able to see the dormitories for the guards.

We stayed at one of Marriott’s Autograph Collection Hotels in St. Augustine. It was lovely. The Casa Monica was opened in 1888, and is filled with authentic antiques only seen in museums. They were easily identifiable by their historic characteristics.

The city’s skyline was dramatic with its spheres and domes.

Historic George Street was crowded with tourists as they looked, sought and ate the most delicious looking ice cream combinations you could want. The eateries and pubs were plentiful, as were the shops with their samples of wines and other goodies.

If you are a people watcher, this is the place. The tourists were a mixed bag of colors and faces, young and old. Some from New York, some from the Middle East, some from the Orient. Everyone was friendly and courteous. It was delightful to be in such an amorous atmosphere.

George Street is an old walkway in St. Augustine. In the evening it is so filled with people, you could rub shoulders. Could be a good way to make new friends.

I am doing some research for my book that I am writing and came across interesting information. The Spheres in the image below are the architectural elements of the former  Ponce de Leon Hotel, 1885-88, where Flagler College was located. It would have been great to visit the building to see Tiffany’s windows in the dining room.  The Ponce de Leon Hotel was designed and built by graduates of McKim, Mead & White offices and the Ecole des Beaux Arts. Famous, very famous architectural offices and school.

The streets had a horse and carriage on every block, sometimes two.

What’s the oldest city you’ve been to?