The screams were heard above the tall trees in spite of the pounding sounds of horses hooves in the dense forest. A sudden flapping of a flock’s wings could be heard above, but not seen through the thick billowing smoke. The brigade was one line of townspeople, some filling the pails with water from the brook, others flinging the water on the barn. The bucket was passed from one stationary person to the next. It was futile, the barn burned to the ground with the animals still inside. No one was prepared for the devastation. No one knew then about the fire brigades that would be coming in the future. No one knew about fire trucks or fire hydrants.

In the beginning, the original “hydrant” may have been something like this iron cauldron from China.

Firefighting cauldrons were placed in strategic locations in ancient China and kept filled with water — at the ready — in the event of a fire.

In colonial America cisterns were used to store water for early fire fighting purposes, and these continued to be used even after the introduction of the hydrant in many cities. As late as 1861, Louisville, Kentucky employed 124 cisterns but no fire hydrants. Cisterns are still used today for firefighting. 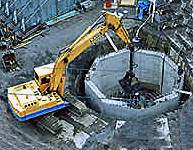 Fire cisterns are underground tanks or structures that hold water to be pumped for firefighting use. Here, a huge earthquake resistive fire cistern is being constructed in metro Tokyo as part of a larger plan of fire fighting readiness in this seismically active metropolitan region.

Around 1801, the first post or pillar type hydrant was a combo hose/faucet outlet with the valve in the top. This early form of the fire hydrant was essentially a metal pipe enclosed in a wooden case. There was a valve at the bottom, with an outlet on the side, near the top. Typically, the wooden case was filled with sawdust or manure as insulation to prevent freezing in the winter, but this didn’t work very well. There was a variation on the drain invented later that allowed the water to run out of the rise after each use, in an attempt to prevent freezing. The basic idea is still used today in cold climates.

In 1802, the first order for cast iron hydrants was placed with cannon maker Foxall & Richards. In 1803, Frederick Graff Sr. introduced an improved version of the fire hydrant with the valve in the lower portion. These were inserted into wooden mains with a tapering joint. In 1811, Philadelphia claimed to have 230 wooden hydrant pumps and 185 cast iron fire hydrants.

In this close-up cropped from a copy of an N. Currier lithograph of 1854 is depicted an early cast iron “flip lid” hydrant at a fire scene in New York City; the operating nut, or in some cases, a wheel, resided under an iron lid atop the hydrant body. This was a carry-over from the wooden cased hydrants which also had lids. Flip lid hydrants were a short lived predecessor of the modern dry barrel hydrant which has it’s operating nut exposed.

What is notable about this painting is that it is one of the earliest color images of a fire hydrant, and depicts not the expected “fire hydrant red”, but a silver or grey body color.

This early example of the dry barrel type hydrant was made by the Union Hydraulic Works in Philadelphia, ca. 1850 (c) 2001 Ethan Kennedy

Fire Hydrants were usually painted red at first. Here in the USA I have seen some fire hydrants that have been painted by artists. Some are just colors recognizable by the fire brigade, some are sleek shiny chrome like this one that I found in front of the Norwalk, Connecticut Public Library.

In the hot summers, do you remember running into the spewing water from the hydrant? Who turned it on?

Look for the hydrant collection next week.