Art Could Save Your Life 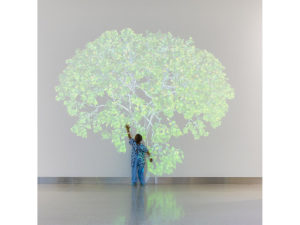 (Originally written and published by Sara Genn at The Painter’s Keys)
Dear Artist, and to all my wonderful friends in the arts:

In Canada, doctors are prescribing museum visits with the cost of admission covered by universal healthcare. “We know that art stimulates neural activity,” says Montreal Museum of Fine Arts director general and chief curator, Nathalie Bondil. The program, piloted last year, is an extension of the museum’s work with their existing Art and Health Committee, where they participate in clinical trials studying the effects of art on people with eating disorders, cancer, epilepsy, mental illness, and Alzheimer’s disease. This “museum as hospital” idea also has legs for older people, the physically disabled, and others with mobility issues. Because looking at art bumps cortisol and serotonin levels in the brain, it produces an effect in the body similar to exercise.

Mike Kelley 1 (2007) at the Cleveland Clinic by Jennifer Steinkamp (b. 1958)
Steve Travarca photo

This past Wednesday, the British Medical Journal published a longitudinal study tracking the correlation between arts engagement and mortality. It turns out that hitting a museum just once or twice a year can lower your early death rate by 14%. Culture vultures fare even better at 31%. On top of this, studies from Denmark and Great Britain have found that paintings — especially abstracts — in hospitals improves patient satisfaction, health outcome, length of stay, and pain tolerance.

While experts hammer out what kind of art heals best, the big hospitals are hiring their own curators to test the notion of “hospital as museum”.

“We set out to try and change the paradigm of what it’s like to be in a healthcare setting — that in some way, it might be inviting and enriching when you come to the hospital for whatever reason, whether you’re working there, a visitor, or a patient,” says Joanne Cohen, executive director, and in-house curator at the Cleveland Clinic. And while some scholars fear that abstraction is too ambiguous for patients experiencing states of unfamiliarity, vulnerability and stress, Danish architecture and design professor Michael Mullins says that size and placement of work, color, contrast, shapes, and movement are factors just as important. While working on a recent project for a hospital in New York, the only request I received from the gallery was, “no green, no red.” 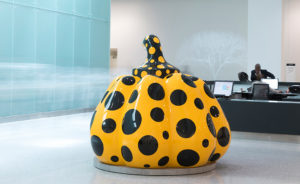 Pumpkin (2014) at the Cleveland Clinic by Yayoi Kusama (b.1929)
Steve Travarca photo

PS: “I am convinced that in the 21st century, culture will be what physical activity was for health in the 20th century.” (Nathalie Bondil)

Esoterica: When I was about 20, the hospital in which I was born purchased some paintings for their palliative care floor. At the time, my work featured cloudless, gradated color field skies, with kids floating and flying dreamlike above a thin strip of flat, white snow. For some time, I wondered if the paintings would be helpful or upsetting to those in the hospital facing the end of life, especially when I seemed to be at the beginning of mine. Years later, I received a letter from someone who had spent many months with my paintings while saying goodbye to their loved one. Their words left me grateful and connected and honored to be a part of such an important time. “Hopefully, it comforts.” (Joanne Cohen) 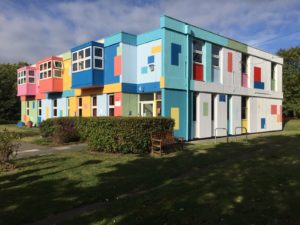 Recovery College (2016) in collaboration with Hospital Rooms and South West London and St George’s Mental Health NHS
by Tim A. Shaw (b. 1982)

Thank you to: Sara Genn

The Letters: Vol. 1 and 2, narrated by Dave Genn, are available for download on Amazon, here. Proceeds of sales contribute to the production of The Painter’s Keys.

“Imagination is not a talent of some men, but is the health of every man.”

The Letters: Vol. 1 and 2, narrated by Dave Genn, are available for download on Amazon, here. Proceeds of sales contribute to the production of The Painter’s Keys.

“Imagination is not a talent of some men, but is the health of every man.” (Ralph Waldo Emerson)

My second book-Writing as medicine