I 95 South–day before Thanksgiving (no one was hurt)

Claus and Franklin family at the Thanksgiving table.

The day before Thanksgiving, on our ride to Raleigh, this wasn’t the only incident causing a mega traffic mess. There were other accidents, and thousands of cars and trucks going south. We were in the middle, our muddle, should have left before sunup. Our kids, coming from Atlanta had similar traffic. Never before have I seen such a mess, and never again. I will always leave before the sun has risen. We passed a billboard that said, Would you rather fly?

Nah, flying isn’t the answer. The airports have their own messes. My best, stay home, at least on the biggest travel days of the year. Home is our favorite vacation spot. Like right now, by a cozy fire, roasting marshmallows, and

delicious hot soup on the stove filling the house with aromas to make your mouth water, me writing my book and Tom writing science. It’s toasty in this place. A perfect place to be.

Our Thanksgiving home away, the Raleigh Renaissance Hotel, is surrounded by high-end shopping. Just walk out the hotel door, and you have scads of shopping choices, even Target, in the middle of all these gorgeous shops and boutiques. We saved the shopping for the day after Thanksgiving, which couldn’t come soon enough. I have some of the shopping in pictures.

We found a delightful men’s shop that’s also right here in Greenwich, Bonobos. Anthony was adorable while helping us, he fell in love with my green bling jacket, and here he is modeling it. Everyone in the store stopped and stared. Now showing off his bling shoes, me hiding behind. Anyone know where we can find Anthony a bling jacket?

Renaissance Hotel lights not on yet.

The letters of artist Robert Genn have been coming to my email inbox for about twenty years. When Robert passed, his daughter Sara took over, and is doing fabulously. She often posts his letters as well as hers.

Below is one of the Genn letters. They are always informative, challenging and progressive. There’s an analogy between writing and painting. I say that because I am both, writers work from a blank page, artists from a blank canvas. The current letter is unchanged from their posting. As a writer, at the moment, I’m rewriting my second book. The Unforgettable Miss Baldwin.
From the Genn family:

Like the novel or memoir many of us feel we have lurking inside but will probably never put to paper, there is undoubtedly a painting or two that simmers in the arm and hand of all creative beings. More primal than writing, mark-making begins in early childhood, to be perverted later into a messy and inconvenient activity where the exception to do it in adulthood is made only when it serves an industry. A lawyer friend once invited me to his basement to show me an appealing, sort-of pointillist portrait in cheery colours. “Can you help me get a show?” he asked. An unfinished second one was leaning in the corner. “Was it fun?” I asked. “Yes,” he said. “How much did you enjoy the second painting?” I inquired. He replied, “Not as much as the first.” 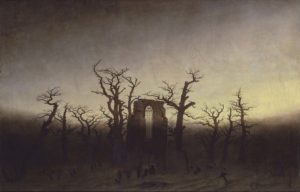 In her 2001 lecture series at Cambridge University, Margaret Atwood explained the difference between writing and being a writer: “Everyone can dig a hole in a cemetery, but not everyone is a grave digger,” she said. “The latter takes a good deal more stamina and persistence. It is also, because of the nature of the activity, a deeply symbolic role. As a grave digger, you are not just a person who excavates. You carry upon your shoulders the weight of other people’s projections, of their fears and fantasies and anxieties and superstitions.”

I drove home from the studio visit and picked up my brush, thinking it was perhaps easier to be certifiably unemployable than to have a choice about being a painter. Enjoyable or not, the digging would continue until I became a grave digger. I remembered my parents discussing whether we, their children, should have something to fall back on, should we fail as artists. My mum insisted we all take a turn at summer work. I was, for three weeks, the dessert-cart-girl at the Black Forest Restaurant. Soon, the manager relegated me to drawing on the specials board. My dad, as if he knew the secret to never holding a real job, suggested we spend our summers daydreaming and sticking to independent projects.

Atwood recalled, “There were no films or theatres in the North, and the radio didn’t work very well. But there were always books.” She said she became a writer one day when she wrote a poem in her head, while walking across a field. “I didn’t know that this poem of mine wasn’t at all good, and if I had known, I probably wouldn’t have cared. It wasn’t the result but the experience that had hooked me: it was the electricity. My transition from not being a writer to being one was instantaneous, like the change from docile bank clerk to fanged monster in ‘B’ movies.”

PS: “Any form of human creativity is a process of doing it and getting better at it. You become a writer by writing, there is no other way. So do it, do it more, do it better. Fail. Fail better.” (Margaret Atwood)

Esoterica: Margaret Atwood was born in 1939 in Ottawa, Ontario to a forest entomologist father and a mother who had been a dietician. Because of her father’s research, Atwood spent her childhood commuting with her family between Toronto, Ottawa, Sault Ste. Marie and the Quebec wilderness. She didn’t enroll in full-time school until she was eight and read Grimm’s fairytales and Dell pocketbook mysteries, animal stories and comic books. “I learned to read early, was an avid reader and read everything I could get my hands on — no one ever told me I couldn’t read a book. My mother liked quietness in children, and a child who is reading is very quiet.”

Thank you to Sara Genn. www.painterskeys.com

Gail Ingis Claus is an author, artist/painter and interior designer. Her upcoming romance The Unforgettable Miss Baldwin is in revision. Her current historical romance, Indigo Sky can be purchased on amazon.

Flowers for that added love and color from Tom

November is an exciting month for writers and authors. NANOWRIMO. Every November – newbie writers and multi-published authors from all over the world make a commitment to write a 50,000-word novel. The GOAL is to write 50k words for the month. Essentially a first draft. Some might go on to write more words but the goal is to get that 50k. I’ll be joining in the fun on my own, as I revise my WIP (Work in Progress) The Unforgettable Miss Baldwin.

For the writers out there you know the saying that “good writing is all about rewriting.” I’m currently on my tenth draft of my next book. This one’s a big revision – more than fine-tuning the romantic bits and bobs. Writers are always looking to improve our craft. With that in mind, I signed up for the Westport’s Advanced Fiction Writing Group. This is a great critique group led by the talented editor, Adele Annesi. The critiques are mega helpful. I also took an amazing online course October 1-4  with New York Times Bestselling author, Kristan Higgins, Setting as Character. Fantastic. If you’re interested, you can check out the online courses on the CTRWA (Connecticut Chapter of the Romance Writers of America).

But writers also know that in between the rewrites you need to regenerate your imagination and your body. I like to play my guitar—I’m working on building those old calluses again. And my piano too, even if it’s only to tickle the ivories for a few minutes. Walk every day with Tom Claus (my hubby) and Ed, our ninety-three-year-old inspiration, and ballroom dance with my instructor, Henry, sometimes with Tom, that’s the best, really gets my heart pumping. And of course, Tom gives me flowers to inspire me as I write.

Oh, was I talking about writing?

My work-in-progress or WIP, The Unforgettable Miss Baldwin has taken about two years (and counting). One day at a time, one scene at a time. I am also constantly reading one of my hundreds, but who’s counting, craft books, like all those Thesaurus books and Emotional Beats by Nicholas C. Rossis. Which sometimes sends me down a different path in my writing. I will let you know when my Gilded Age Mistresses: The Unforgettable Miss Baldwin is ready for you.

I will be delirious when I type THE END.