Author, Blogger, Historian, Writing happily ever after, one book at a time.

The writing bug bit me when I decided to create a copy of Albert Bierstadt’s, “Domes of Yosemite.” What? You were painting and that’s when you wanted to write? What a conundrum.

In my careers, I have written catalogs and lectures, and even letters, but a novel, not possible. I began writing, just for fun…it was not fun. How in the world do I do this?

All I wanted was to tell the story of this 19th century debutante, who left her husband for another man, in times when that kind of thing was unheard of. Sure, there was good reason, there had to be in those days when even the sound of the word, DIVORCE, had folks cowering and covering their ears.

Then, on one fateful winter day, I heard about three writer’s giving a talk at my local library. I reserved a seat right away. It was the first time I’d been around other people who had writing on their minds. It totally changed my world.

When I decided to pursue writing, I studied every single thing I could find about the business, worked with a critique partner, critique groups and two editors, and studied as much as I could about the craft of writing.

A couple of months after releasing my first book, I made the jump into audio after an author friend recommended actor Jane Oppenheimer to narrate. It was something my busy readers wanted, another way to read a story, listen while you work.

Focusing a section of my marketing efforts towards the sale of my audiobook has helped with my success. Giving out the free download codes that ACX provides with each audiobook release is a great way to build buzz among your readers about a new release and to encourage reviews. You can find me on social media.

This huge, mural type 10’x15’ painting was finished in 1867 and hung in Mr. Lockwood’s Mansion in Norwalk, CT, until Mr. Lockwood died four years later. The painting was sold to an auction gallery for a measly $5100, originally Mr. Lockwood paid $25,000, that was in 1867, Imagine? I wanted to get it back from the St. Johnsbury Atheneum, Vermont, but that was not possible. The director gave me prints, pictures, and images and permitted me to photograph the painting.

Look at tiny me, next to the Bierstadt painting 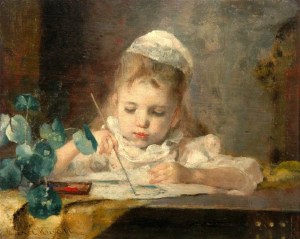 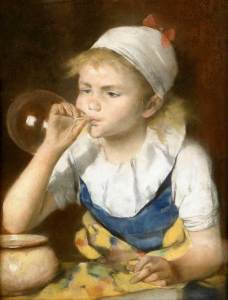 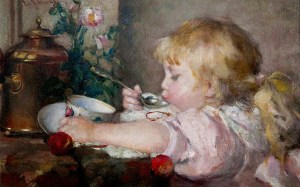 After four desperate tries for my latest writings, a sequel to my Indigo Sky, I finally nailed down ideas in the form of a synopsis. I know, I know, a synopsis is supposed to be, well, sort of like a short story–beginning, middle and end. How do you write this thing without the story? Created as the preliminary to an outline, I left out the unnecessary, and kept in the necessary. In other words, my synopsis left out the B-ST.

Maybe what Stephen King says in his book,”On Writing” in his Second Foreword, is true, This is a short book because most books about writing are filled with B-ST. Fiction writers, present company included, don’t understand very much about what they do–not why it works when it’s good, not why it doesn’t when it’s bad. I figured the shorter the book, the less the B-ST. King suggests that every aspiring writer should read The Elements of Style. Rule 17 in the chapter titled “Principles of Composition” is “Omit needless words.” I tried to do that in my short synopsis, maybe three pages double spaced, based on someone’s probable expectation. Enough of this, I can see your eyes rolling from here.

So now how to create that outline? I am about to–finally–learn how to use Scrivener, created for us (writers) to outline. Wish me God’s speed . . .

As the tournament was reaching its climax, it got more difficult to stay awake. So, we had a meeting of the minds, and decided that going to bed around 8:00 p.m. was at least a way to get in a couple more hours of sleep. When it was all over we had to come down from that high watching our favorites win. And get some sleep!

“There was a great deal at stake for Serena Williams in the Australian Open final, far more than having to push aside her older sister” said USA Today journalist Sandra Harwitt. “For Serena, the 6-4, 6-4 win Saturday to hoist the Australian Open trophy for a seventh time establishes a record. At 35, she is the only player–man or woman–to win 23 Grand Slam tournament singles titles in the open era.”

Serena is thrilled. She said she feels like she has been chasing it for a long time. Once it got on her radar, she knew the possibilities. She finally succeeded at the Australian Open this year.

Rising to the top is tough, but the journey leads to a joyous finale. Experiencing the win gave Roger his 18th Grand Slam. I love what Sandra Harwitt, USA Today journalist said, “So when experiencing a great victory, a champion tries to store the grand achievement, in slow motion, in his memory bank.

At least that is how Roger Federer, 35, suggests he handles the milestones of his life, including his latest successful quest of glory — 6-4, 3-6, 6-1, 3-6, 6-3 win Sunday against Rafael Nadal, 30, his oldest rival in the game, in the final of the Australian Open.”

Rafael Nadal & Rod Laver. The stadium was named after Laver

Tops in tennis. How many faces can you name?

Tennis–one of my successful careers as a teaching pro, and member of the USPTA. FYI, in order to be a USPTA member, you have to pass a written and on-court exam. A member of the organization for forty years, they have awarded me lifetime membership. They commissioned me to paint a scene for their 75th anniversary in 2002. The painting is in Houston, TX at their national headquarters. Players in the painting are Jimmy Connors, Chrissy Everett, Jack Kramer, Roscoe Tanner, Billy Jean King, Pam Shriver, John McEnroe, Peter Fleming, Arthur Ashe, Fred Perry, Rod Laver, Althea Gibson, Stan Smith.